Psychedelic drugs profoundly affect conscious experience. This often involves ‘ego-dissolution’ or the loss of self and a sense of ‘oneness with the universe’, purportedly correlated with changes in the ‘default mode network’ (DMN). However, the ‘self’ is largely a narrative construct mediated by language. Language is also a general tool for categorizing the world, e.g., organizing visual spectral information into color labels. Anecdotally, some patients who recover from aphasia describe their aphasic state as having lacked a self and the world as being more interconnected or one, descriptions that grossly resemble psychedelic phenomenology. For these reasons, we hypothesized that a more parsimonious explanation of the psychological effects of psychedelics has to do with their relative impact on the neurobiology of language. We tested this hypothesis using neuroimaging meta-analysis.

Specifically, we conducted a search for neuroimaging studies of psychedelic drugs using PRISMA standards (assessed May, 2022). This resulted in 3212 articles of which 94 met inclusion criteria of having neuroimaging Talairach or MNI stereotaxic coordinate tables, including seven ayahuasca, one DMT, 64 ketamine, 10 LSD, and 12 psilocybin studies. Seed-based d Mapping (v6.22) was used to model drug vs placebo. We limited this analysis to studies collected from ‘classic’ psychedelics (i.e., excluding ketamine), during the resting (as opposed to active) state, and in healthy volunteers (N=432), using dose (low, medium, or high) as a covariate. We queried the neurosynth.org database to determine which of more than a thousand terms were most associated with resulting clusters (p < .05 corrected) and which whole-brain meta-analyses most resembled the unthresholded drug vs placebo map (r > 0.1). 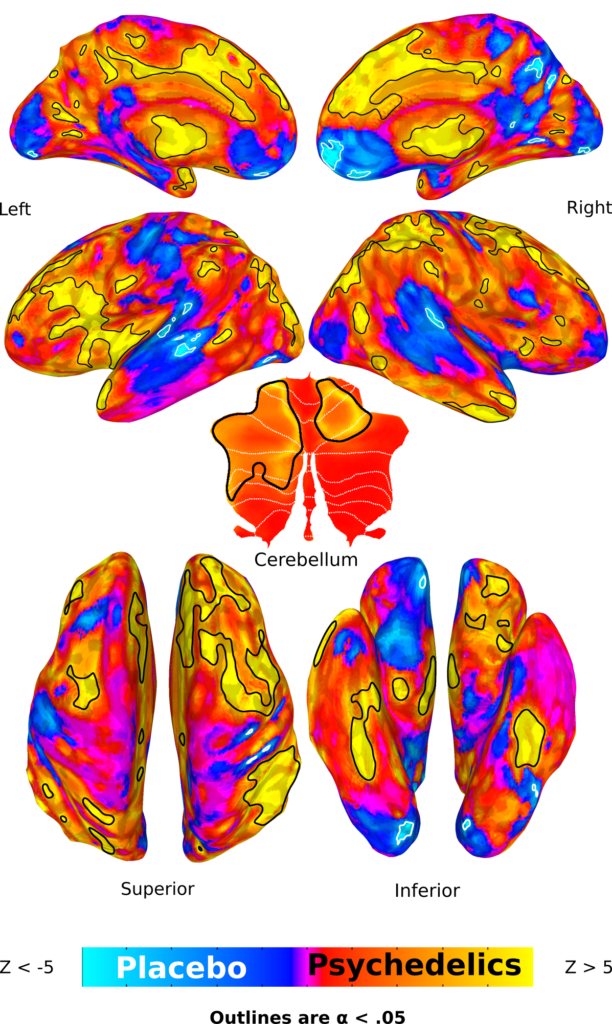 Contrary to existing suggestions in the neuroimaging literature, our results show that the primary effects of classic psychedelic drugs are not related to the DMN. Rather, these drugs drive increases in activation in memory and language systems, and decrease activity in regions most central to sound and low-level speech perception. Thus, loss of ‘self’ and feelings of ‘oneness’ are parsimoniously explained by changes to the neurobiology of language during psychedelic use. Psychedelic induced neuroplasticity in these networks, in concert with changes in self narrative centered around alterations in conscious experience, likely underlie the positive changes in mental health and wellbeing associated with psychedelic drugs.